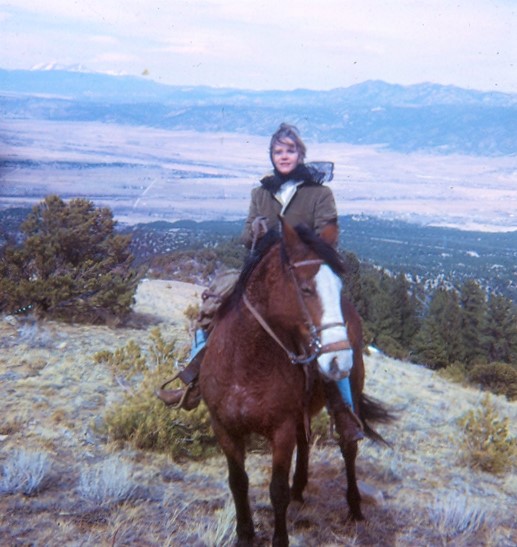 It’s minus fifteen degrees Fahrenheit, dark, and snowing hard in the small Colorado mountain town. Hollering Woman leaves her kids and husband at home, scrapes ice off her ancient green Plymouth and braves the treacherous roads to take her place in the dank basement of an old post office turned community college. It’s a creative writing class and Hollering Woman dreams of becoming a writer. The class signals a chance to find out.

This night, the long-haired, bearded  instructor with the Brooklyn brogue challenges the class of former drop-outs, housewives, senior citizens, and bootstrappers:  The local newspaper is seeking a reporter.  Anyone who applies for the job and is hired will receive an automatic “A” in the class.

Hollering Woman has zero newspaper experience, but she’s a grade hound. The next day she abandons her bandanna, ditches her bell-bottoms for a pair of borrowed slacks, burrows into her sheepskin coat  and waits for the newspaper to open. She is about to meet a man who will change the course of her life.

The editor, an older man in his late forties, looks more like a balding leprechaun than a young woman’s “hero”.  Barely taller than she is, with pop-bottle glasses and ink-stained fingers, he offers her a cup of coffee and invites her to sit down and tell him about herself and her experience. That takes all of fifteen minutes. Imagine her shock when she is hired as a general reporter and photographer. Hollering Woman gets the “A”, gets the job, but more importantly, gets something she didn’t even know she desperately needed.  A mentor!

Recently, Hollering Woman was ruminating on the role of mentors in her life. The list was long and included the support of family and friends, but she was especially interested in the professional writers, teachers, editors, and colleagues that had been there to help and guide her on her quest to become a writer.

Of, course, the first name on that list was the editor of the little newspaper. He saw her raw potential and took a chance. He instructed her, brought her under his wing and shared his thirty years of writing and editing expertise. He gave her the confidence and skills to go forward to the next stop. Not because he had to, but because he wanted to. Because, like all the other mentors Hollering Woman has been fortunate enough to have in her life,  he recognized it as his responsibility and pleasure. He also taught her to “pay it forward.”

The concept of mentoring is an ancient one dating from the Greek epic, The Odyssey. The wise and knowledgeable Mentor guided the young hero Telemachus through his trials and triumphs. Today, a mentor is still defined as a “wise and trusted teacher, guide and friend.”  And, while today’s mentor may not always be “wise” and they might not always advise “heros”, they are encouraging, knowledgeable, often great models and share their expertise willingly. They can make all the difference in a writer’s journey at every stage of development.

No matter where you are on your personal writing Odyssey, you need a mentor and you need to BE A MENTOR.  As writers, we never know when the smallest expression of support or information will make a difference in a writer’s life.  Whether it’s in a critique group of fellow writers, the specific advice of an editor, teaching a conference workshop, or just welcoming a new writer into your circle of writing friends and contacts; share what you know and how you know it in a spirit of friendship.  And don’t forget how beneficial the idea of “six degrees of separation” works with writers.

Just this past year, Hollering Woman reconnected with an old friend and mentor. Through his contacts, she was able to get a contract for one of her books. She returned the favor when she read and offered comment on his latest manuscript in a different genre. Mentoring can be and usually is a win-win for all involved. Say thanks to your mentors and mentor someone you know that could use some help and encouragement.

Hollering Woman is passionate about mentoring.  Please share your personal stories about the mentoring experiences you have had in your life in the comments area below.  Also thanks to the recent fellow writers who commented about mentoring on the Poet and Editors group on LinkedIn.  With that said, Hollering Woman will be shouting out to all the mentors in her life in future blogs.

As for that newspaper managing editor that changed her life all those years ago:  HC sends a GIANT SHOUT OUT AND THANK YOU TO BILL ORR-OLD SCHOOL NEWSPAPER MAN EXTRAORDINAIRE AND GREAT FRIEND!